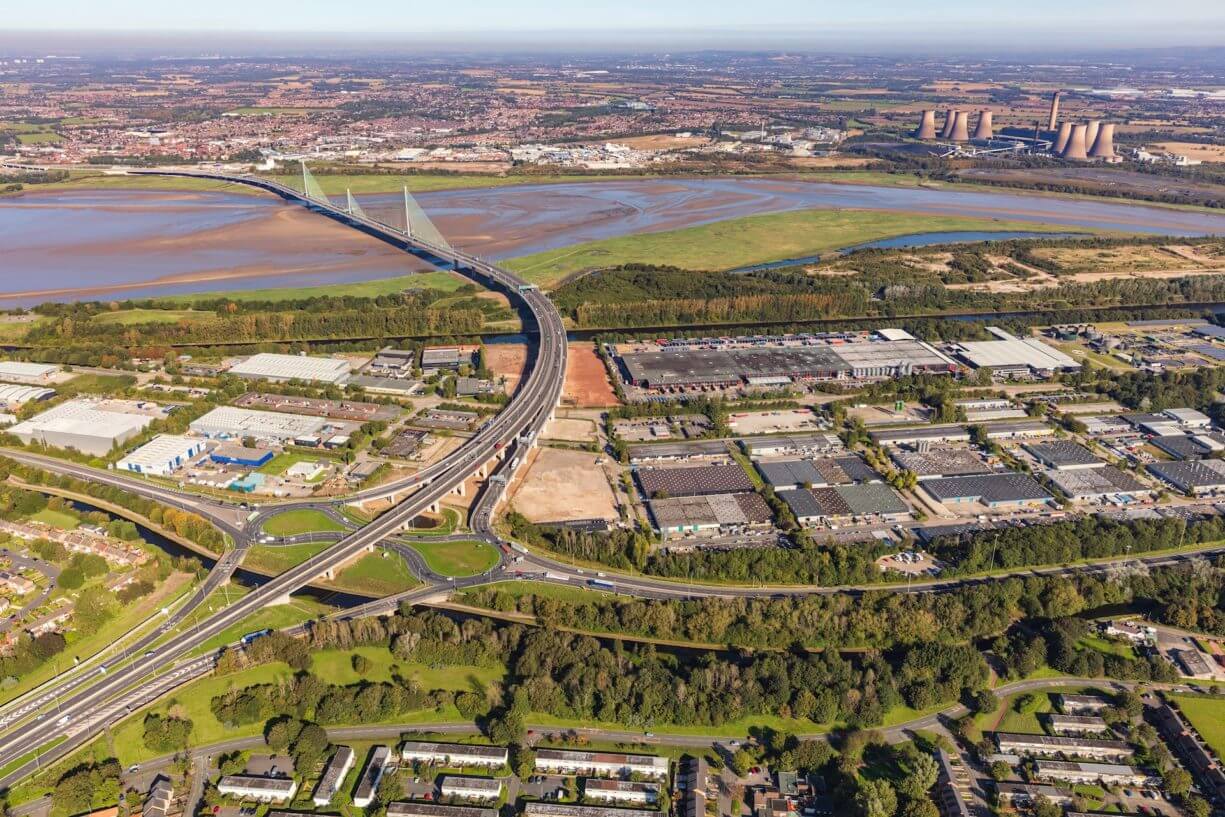 We have refurbished almost 90,000 sq ft over recent years with more planned for the future

The Mersey Gateway, a major infrastructure scheme to build a new six-lane toll bridge over the River Mersey to relieve the congested and ageing Silver Jubilee Bridge, is now complete.

While the bridge has been years in the making, this isn’t the end for the area when it comes to big changes… in fact, this is only the beginning.

As part of the Mersey Gateway project, the plans to kick-start an extensive 20-year regeneration programme for Halton are now underway.

So what do these plans look like and can we really expect one infrastructural investment to truly make a difference to businesses in the area? We think the answer is yes for the following reasons…

With the length of the bridge and its viaducts totalling 2.13km, it’s no surprise that the bridge has been titled a ‘gateway’.

Crossing St Helens Canal, Widnes Warth Saltmarsh, Astmoor Saltmarsh and Wigg Island, Mersey Estuary, over the Manchester Ship Canal and across Astmoor Industrial Estate, the new bridge is a key link between a number of vital areas in the region.

Described by the Commission for Architecture and the Built Environment (CABE) as a ‘project of a lifetime for all those involved’, the bridge was partly funded by the National Infrastructure Plan.

The full list of regeneration areas are broken down and categorised as follows:

Astmoor Of The Future

Number 3 on this list is Astmoor – a site that has previously struggled to meet the needs and demands of successful, innovative and ever-expanding businesses in the area due to the size of premises available.

Businesses based locally will have already noticed the extent to which the regeneration plan has triggered significant investment from the private sector. Indeed, as one of the major landlords at Astmoor Industrial Estate, we have been working very closely with the local council to understand how the infrastructural changes will benefit our tenants and to ensure that we maximise the opportunity this presents for the region.

We know that while the new regeneration plans will ultimately lead to an influx of new quality premises, however the whole site must be upgraded to bring existing premises in line with the new. As such, our recent refurbishment investment to a number of our existing premises involved a programme of works totalling £650,000.

Although the refurbishment, of units 79-81, was our largest project in Astmoor to date, in total we have refurbished almost 90,000 sq ft over recent years, with more planned for the future.

The area is already benefiting from being much better connected but, while the consultation period has now ended and we await the publication of the final masterplan, there are a number of businesses locally who are keen to know whether this additional infrastructure means they should be making investments of their own in the near future.

Our advice? With plenty of industry eyes on the area locally and further afield, due to its prime location and connectivity, it’s would be shrewd for businesses considering moving to Astmoor to capitalise on its location and future regeneration investment, to make the move sooner rather than later.

Now is the time to negotiate a great tenant deal before others follow when the full benefits of the investment take effect.